How you install Deluge differs from operating systems but it is available for Mac OSX, Windows and Linux. We recommend that you use the latest version available.

When you have installed Deluge you should download our plugin and then use the Deluge settings to add a new plugin. In Deluge preferences, under plugin, you should be able to click install
plugin and locate the .egg file that you have downloaded. Make sure that the downloaded file is named LobberCore-0.1-py2.7.egg or LobberCore-0.1-py2.6.egg matching your installed version of Python. 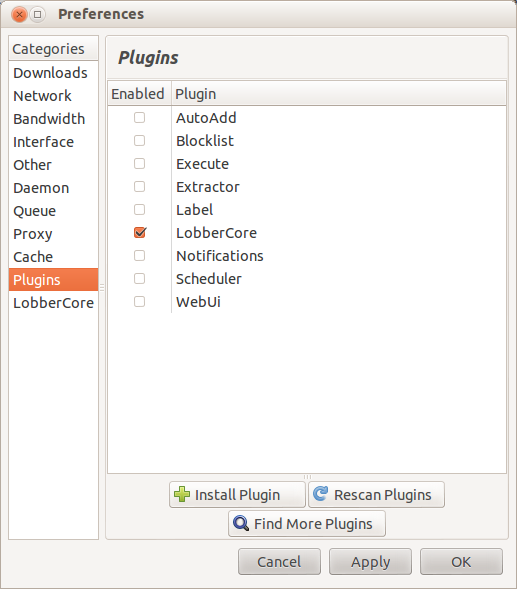 After you installed the plugin you should be able to check the box beside LobberCore and a new choice (LobberCore) should be visiable at the bottom of the left column.

Common problems
Nothing happens when I check the box beside LobberCore - The downloaded egg-file probably has the wrong name, it should be named LobberCore-0.1-py2.6.egg or LobberCore-0.1-py2.7.egg depending on the installed version of Python on your system. 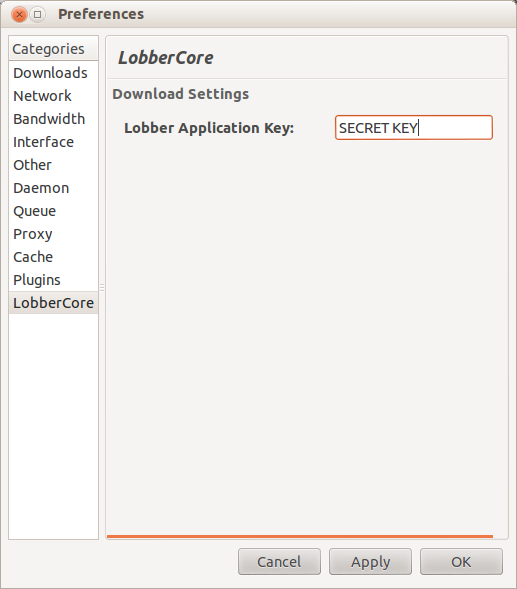 Done. The plugin will now check Lobber every 15 minutes to see if there are any torrents the key have read access to, if any new torrents are found the plugin will download them and start them in Deluge.

If you want to make some advanced settings you have to locate the file lobbercore.conf, it should be in $HOME/.config/deluge/ for the user that is running Deluge.

If you set up Deluge to support the Lobber web application data http upload functionality you are probably want to run it headless.

Edit /var/lib/deluge/.config/deluge/core.conf to start the plugin.

Restart deluged to load the plugin.

Last but not least edit the newly created file /var/lib/deluge/.config/deluge/lobbercore.conf so it looks like this.

download_dir should match the SEEDING_DIR in Lobbers Django settings.py. The deluge user have to have permission to write in the directory.
Deluge should now seed any torrent until there is another client seeding it and then delete the torrent with data.

Common problems
Deluge or the plugin doesn't start - Check the configuration files permissions, do the deluge user have permission to read and write them?